Episode 59: All the Millions of Times

Andrew Sallee approached me at a Denison Witmer concert at the Westport Coffeehouse about nine years ago. He asked, “So I’ve seen you hanging around The Billions at their shows.  Do you do music or something?” (His relatively new band, Namelessnumberheadman, had played with The Billions a couple times, and he had, in fact, seen me hanging out with them at their shows.) He then volunteered his services for any recordings I might make. 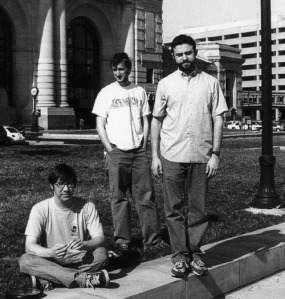 Since then, I’ve often wished Andrew would just leave the Northland and move to Raytown. We’d probably start a jangly, lo-fi psychedelic garage band and release seven-inch records at a Jay Reatard pace. I guess I’ll have to keep dreaming.

Until then, we get to enjoy his solo set tomorrow at the Benetti’s Fall Classic. The show starts at noon, and he’ll play with Sam Billen (Formerly of The Billions…see how this story has come full circle?) and The Sunday Paper.  He even promised to play my requested song. It’ll be a good day.