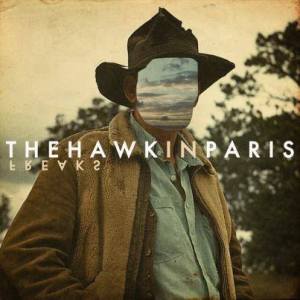 Pop music is difficult to execute well. Many times accessibility trumps creativity and bands leave me wanting. But some do it well, even while toying with popular, ephemeral sounds and studio chicanery.

This is clearly what Matt Bronleewe, Dan Haseltine and Jeremy Bose attempt with The Hawk in Paris. They clearly don’t desire to forge new musical ground. In fact, they sound like a bunch of middle-aged guys trying to re-create the magic of their favortie eighties synthpop bands. (Definittely not a bad thing.)

The swagger and spaghetti Western guitars in title track, “Freaks,”obviously owe a lot to Depeche Mode. “Birds on a Wire” seems to take more chances, dropping out the beat in places and adding flourishes of acoustic guitars, while invoking some of Simple Minds’ mid-to-late eighties work. Kitsch weighs heavy on the last track, “Wake Me Up,” tipping its hat to the way Pet Shop Boys’ early work mixed R&B with pop. The auto-tuned vocals and lyrics (“I don’t wanna have another dream without you.”) further add to the band’s shtick.

With the promise of two more EPs this year, I’m excited to hear what The Hawk in Paris delivers. As a rabid fan of Simple Minds, Depeche Mode, Pet Shop Boys, Camouflage and New Order, I welcome anyone who seems to get synthpop. Sure The Hawk in Paris is referential and invokes some obvious influences, but I think that’s the point. And I love it.