Neko Case and Dan Bejar of the New Pornographers

Katy and I attended the New Pornographers show at Liberty Hall on Monday with our friends Ben and Brandon. The Star did a fairly good job reviewing the show.

There are a few things I’d add in response to the Star’s article, however.  The author clearly doesn’t get Dan Bejar’s shtick. Bejar is clearly acting as a pretentious and lazy art snob, and the band is playing into it by allowing his seemingly bad behavior. I found it hilarious. I also have to wonder how many shows the writer has ever been to, since he seems to criticize the on-stage drinking. It was clearly no Guided By Voices-style drunken debacle, so why comment? Oh yeah, and the band never performed “Slow Descent into Alcoholism.” I was prepared to shake my money-maker to it, as it’s my favorite song of theirs, but the time never came. And what in tarnation is “insistent pop”? Sheesh.

I posted my pictures from the show. Check them out.

“It feels good to be wanted.” 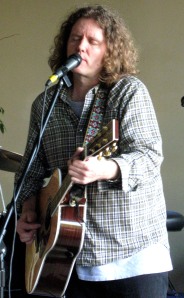 On July 30, Katy and I helped bring intersecting tours to Kansas City for an evening. Michael Roe and Michael Miller came from the West, and Terry Taylor and his band (his son, Andrew, on bass and Steve Hindalong on drums) came from the Southwest. The show was at Harry’s Mug, a storefront church’s coffeeshop in Grandview, a suburb just south of Kansas City proper.

It was my second time running sound for Roe. (The first was a couple years ago on his stop in Olathe on the Roe/Pritzl tour.) I might have had a total fifteen minutes to run through checks with all three guys on a PA system that I was new to. Roe had the shortest, literally plugging in his guitar and singing a line.

I may be wrong, as I wasn’t standing in front of the monitors, but I am confident that Roe and Taylor did not have good mixes. (I especially apologize to Steve, as his microphone was off for the first few songs of Terry’s set.) They played their heart out, nevertheless.

With such large catalogs of work, it is probably difficult to speak to song choice. Taylor did not have a new record, but he was doing his fist solo tour in quite some time. It was probably the first time an audience in Kansas City had an opportunity to hear selections from Mr. Buechner’s Dream, Avocado Faultine or even John Wayne, without making a trek to Cornerstone. That said, I think he did a decent job of trainspotting songs from solo, Daniel Amos, Swirling Eddies and Lost Dogs albums. Roe and Miller, on the other hand, were touring in support of their new records. They played selections from their previous two albums, respectively. Roe’s set was mostly a reclamation of old gospel and blues songs, while Miller cherrypicked songs from each of his albums.

Steve's floor tom and some of his toys

It is probably good to note here just how much Taylor’s rhythm section added to his show. His son, Andrew, filled in very well on the bass. I know that Tim Chandler’s shoes are big, but Andrew seemed to make the parts fit his style. They were typically more simplistic versions of the original bass lines (don’t get me wrong–they still moved around quite a bit), fitting Taylor’s stripped-down approach. And Hindalong was as good as ever. He is one of the best, most tasteful drummers, showing just how much one could make of such a little drum kit. He played with a kick drum, floor tom kettle thing, snare, ride and a chache small toys. While he nailed some of McTaggart’s important fills, he usually simplified all of the parts and made tasteful drumming appear easy.

Anyone who’s seen these guys knows that one of the best parts of their shows is their stories. A couple really stood out to me… 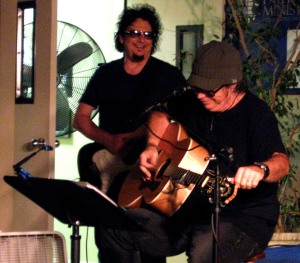 In the past, I have really appreciated Taylor and his literate, thoughtful insights, but he seemed to be full of them at this particular show. Probably the one I have discussed the most was his introduction to “Bibleland.” He talked about a guy who built a Bible-inspired theme park in California. He was obviously about to make fun of the idea in song, but urged us not to be too hasty in our judgments. The Bible says that faith without works is dead, and maybe this guy was acting with the best of intentions. Terry finished his story with, “That’s better than I do a lot of times.”

I promoted, attended and worked sound for a show where I knew I would get plenty of great playing and sarcastic jabs at the religious hoi polloi. (These guys are known for their near-misses in both the christian and mainstream music business. Ironically, when CCM Magazine started its own christian music hall of fame, Taylor’s band Daniel Amos was the first to be enshrined in it.) While the crowd certainly got plenty of silliness, Miller brought transparency, and Roe and Taylor brought history and humility. If anything, they left me with much fodder for conversations with friends.

I tried to write down their setlists while I ran sound. I hope I got them all.

Michael Miller – Lover I Know, Mary, I Made You Up, When We Come To, Carolina Skyline

Michael Roe – I’ll Remember You, Love, In My Prayers, Stranger, Won’t You Change Your Sinful Ways, Jonah In The Wilderness, Smokescreen, Jimmy, Roesbud, You’re Gonna Be Sorry, The Lust, The Flesh, The Eyes And The Pride Of Life, The Boat Ashore, Nowhere Else

Terry Taylor – Mall (All Over The World), Shedding The Mortal Coil, Walls of Doubt, Buffalo Hills, Bibleland, Capistrano Beach, Author of the Story (with Roe), Papa Danced on Olvera Street (with Roe), I Had a Bad Experience With the CIA and Now I’m Gonna Show You My Feminine Side, New Car!, Hide the Beer, The Pastor’s Here, You Lay Down 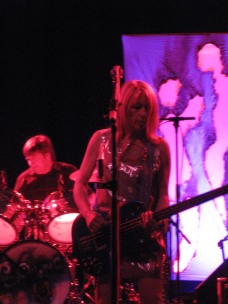 Katy and I went with my step-brother, Dan, and our friend, Brandon Briscoe, to see a Sonic Youth concert Saturday night (7/18/09) at The Uptown Theater. Although they certainly did not disappoint with their musical performance (especially in song choices that eschewed many predictable fan favorites), I was impressed with other aspects that added almost as much enjoyment to my experience as the loud rock and roll itself.

I have to confess that it was my first Sonic Youth show. I’m no slacker; I have done the research. I know that Kim Gordon has historically dressed like a provocative, punk-informed girl attending Warhol’s parties with The Velvet Underground. (Which, come to think of it, is pretty much how Sonic Youth sounds.) When the band took the stage, she sported a short, silver dress. Brandon, who had also seen the old concert pictures and films, immediately commented, “She’s still feisty.” 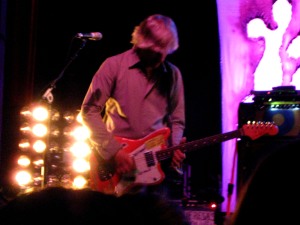 Lee and the cool lights.

In watching and listening to the old bootlegs, it’s clear that the sound at their concerts was not always as impressive as on studio recordings. Resembling a combination of a washing machine and a dentist drill with frantic drumming, bootlegs like Gila Monster Jamboree are only for the most hardcore fans. I know it’s not fair to compare the band in 2009 to where it was at 24 years ago, but it is the same group of people. Moderate success and a consistent live show have enabled it to hire excellent sound men. The guitars were cleanly separated, and the drums sounded beautiful. (In fact, the most impressive aspect of their live sound was the drums. They were not dominating, but they drove the band’s sound. The overhead mic’s even picked up nuances like Steve’s shaker sticks.) And because because Steve doesn’t lay into the ride and crash cymbals all night, Thurston and Lee can listen better and play with or off of each other.

I was also impressed by the light show. I really know nothing about lighting, except that I know when it works well. I know they’re run by computer programs nowadays, but the programs allowed for improvisation, as necessitated by a band like Sonic Youth that thrives on extended jams. There were long, improvised sections, like in the bridge to “Silver Rocket” when lights died down but the director snapped them back on to cue as the band brought the song back up. There were strobe lights and multicolored lights used judiciously that further justified the ticket prices (which were actually fairly reasonable, unlike the additional Ticketmaster fees). 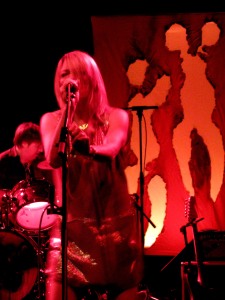 Kim, dressed as a baked potato.

I think what has always intrigued me and attracted me to Sonic Youth is the band’s image. It, especially Kim, projects a disinterested, almost pouty feeling that contributes to the artistic statement it has made for almost thirty years. The band seems to have held onto what Lou Reed only managed to grasp for a few years–an austere, off-putting, New York art student aesthetic. It is what the band has always done, and that is why I liked the concert so much. It was like meeting an old friend and realizing he hasn’t really changed that much in the ten years since you saw him last.

“We’re usually louder, and there’s usually four of us.”

Saturday night, I went with my wife and some friends to see The Sexy Accident play an acoustic show at Prospero’s Books. It was not the entire band, just Jesse Kates and Chad Toney playing acoustic guitars. They opened with a flubbed Josh Rouse cover and preceded to play songs from their last album, Kinda Like Fireworks, and their upcoming, Mantoloking.

The Sexy Accident is basically Jesse’s band. (When he first switched to performing pop songs instead of the ambient, looped music he used to make, the band was called Jesse Kates and The Sexy Accident. He has now trunkated the name.) Jesse writes quirky, angular pop songs, often sprinkled with humor, and he sings in a closed-throat, yet guttural, manner that would make Steven Patrick Morrissey and Kermit the Frog jealous. He is also a talented guitarist, which did not seem quite so obvious Saturday night when his and Chad’s guitars refused to stay in tune.

The beauty of the show was that Jesse made us focus. If the audience was too concerned with the late start, intonation, mix or lack of stage presence, it would have missed the smart pop that Jesse brings. (Not that any of those distractions are necessarily good things, but I think they make the listener hone in on what the performers are really trying to achieve.) Fortunately, there is something about the nature of acoustic guitars that helps us focus like this. There are no guitar effects; everything is bare. It was probably a perfect introduction to some of my friends because they had to focus only on the songs.