I don’t usually associate electronic music with this season of the year, but Junior Boys deliver with this sparse, chilling tune, “Playtime.”

Yesterday, one of my wife’s long-time friends was in town with her family.  To give her time to visit with Katy, I took her six-year old daughter for a walk.  When we crossed the 63rd Street bridge, I hoisted her up over the side to see the railroad below.  She remarked, “I know why they don’t use those train tracks down there.  There’s grass all over them.”

Last week, I attended a presentation by folks analyzing options for better public transportation in the Kansas City area.  (This isn’t just another Clay Chastain pipe dream; it’s a proposal set forth by Jackson County executive, Mike Sanders.)  Since they’ve found that the Federal government could pay up to 50% of the cost for a project like light rail, they feel compelled to formally weigh their options.

I figured I’d pass along information so you can learn about their work and, perhaps, get involved.  Here are sites regarding Jackson County Regional Rail:

I store my old episode on MediaFire. If you’ve missed a show, check out the archives: http://www.mediafire.com/?mi61x88c29ega

Oh yeah, and I’m pretty sure that my enjoyment of the new Bon Iver record qualifies me as trendy.

My wife, clearly at a young age, listening to her dad's records.

I met my wife through the now-defunct email discussion list for Velvet Blue Music.  She was a music journalist and, therefore, a great friend/asset to have, as I tried to make a name for myself in music.

Well, I didn’t exactly get famous, but I did fall in love.  Katy admonishes me when I’m an ass, and she encourages me when I’m about to give up.  And now, she’s having our baby.

We’re broke, so I’m sure we won’t do anything fancy for her birthday tomorrow.  We’ll probably just visit an art museum (for free) and use her coupon for Planet Sub.  But it’ll be the best thing ever.

I did make her a mix CD for her birthday, and I thought I’d play selections from it this week.  Because they’re mostly all mind-blowing pop songs, I figured listeners in Radio Free Raytown Land would also appreciate them.  (Plus, it just gives me a chance to yap about two loves of my life, Katy and records.)   Enjoy.

Tagged cut off your hands, raytown, richard hawley, richard swift, the pains of being pure at heart, trashcan sinatras
Leave a comment
Uncategorized 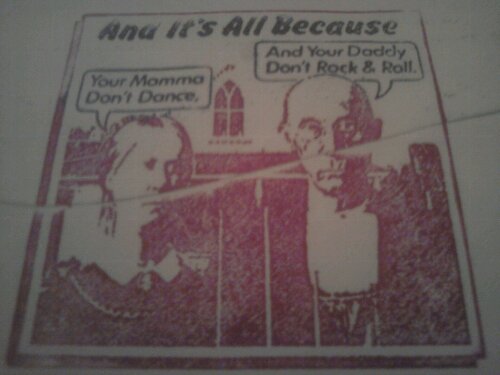 Episode 81: Sugar Never Was So Sweet

I love introducing my friends’ bands to others.  All too often, in college, I’d attend shows with mediocre bands, simply because the musicians were nice guys.  Life’s too short to waste it on so-so music, even if it is made by friends.  So this week, I introduce Jared Collinger’s project, The Enigmatic Foe.  Please visit his Bandcamp page, where you can listen to and buy all his albums.  They’re all different, so listen to all of them.

At any rate, here’s this week’s show.  There’s no such thing as too much Muddy Waters.

I jumped at my friend’s suggestion to do a surf-themed show for my eightieth episode.

I love surf.  Heck, I’m a sucker for just about anything with jangly, reverberating guitars.  Most early surf bands lacked vocalists and snatched cool elements of country and R&B–twangy guitars and grooving rhythm sections.  Surf rock purists, in fact, won’t even acknowledge vocal acts like Jan & Dean or The Beach Boys.  (And to be fair, were you really a surf band if you didn’t even surf?)

I probably cover too much territory in this show, but I try to showcase some originators and the people they influenced fifty years later.  As usual, my choices are less then predictable, with deep album cuts and non-hits.  What counts is that I love all the music, and I hope you do, as well.

An itching in my heart.

Berry Gordy loved to pass songs amongst his artists on Motown (and related labels) until he had a hit with them.  Even then, he’d sometimes continue allowing  other to cover well-worn hits.  Case in point: The Supremes’ 1966 album, A’ Go-Go.

I started Mother’s Day sitting on the couch with my wife–and expecting mother–listening to this fine album.  We’re both huge fan of The Supremes, so it was perfect.  It is funny, however, to consider just how many soul albums, like this one, consisted of a couple singles and essentially seven or eight filler tracks. (Isn’t this basically how much of the recording industry continues to work?)

The album features the group’s mind-blowing singles “Love Is Like an Itching in My Heart” and “You Can’t Hurry Love.”  The Supremes also cover its labelmates, three songs originally made famous by the Four Tops and one hit each from The Temptations, Martha and the Vandellas, Barrett Strong and The Isley Brothers.  Most bizarre are the covers of Nancy Sinatra’s “These Boots Are Made for Walkin'” and The McCoys'”Hang On Sloopy.”  (To be honest, these last two and the other original song, “Put Yourself in My Place,” are just kinda lame and downright silly.)

Just because you find an album on Motown, don’t necessarily expect a well thought-out artistic statement.  That said, you still need to hear A’ Go-Go; it’s a soulful slab of 60s girl pop that’ll offer context for some of The Supremes’ biggest hits.  Besides that, it was the group’s first #1 album.

Some thoughts from this week.

Job-hunting is a time and energy-consuming thing.  I’ve applied for about a dozen jobs this week and had one interview, leaving little time to record a new show.  So, once again, in lieu of an episode, I will just post some random thoughts I’ve had about music this week.

Well, I guess those were random thoughts mostly about music.

Here’s a list of things, in no particular order, in my listening rotation this month.  (You’ll notice the fair amount of 2010 releases, as I’ve been considering my top ten list of albums from last year.)