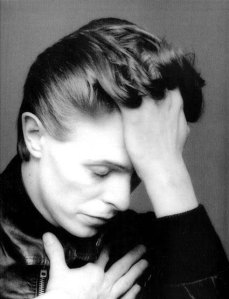 Lately I’ve been researching Brian Eno’s 1970s side-projects and found the albums he recorded with Harmonia and Cluster. (If you’ll remember, I talked about Harmonia in my last episode.) They’re both great examples of ambient music, music intended to be enjoyed equally either in the foreground or in the background. I love this stuff. And not too far removed is some of Eno’s work with David Bowie…

So my brother-in-law lives less than a mile away. His frequent visits to our house provide many opportunities to discuss music with which he’s not familiar. He’s been reading through the February issue of Mojo on our coffee table and saw an article on David Bowie’s 1977 classic, Low. This provided fodder for a lengthy conversation, as well as getting me on a Bowie kick over the weekend that saw me rotating through eight of his albums.

Anyway, I haven’t posted a rotation in a while. Here’s what I’ve been jamming to this past week. I’ll let you play the which-of-these-is-not-like-the-other game.