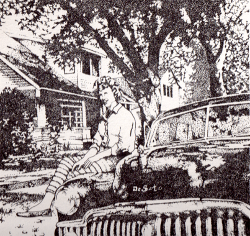 Cover image from Blue Trapeze's first album, Who Were You Then?

I love jangly college rock from the 1980’s. These bands usually invoke classic 1960’s psychedelia of The Byrds or The Velvet Underground, but with the immediacy of punk. These bands were also crucial to creative music’s development, as they helped carve out the college rock niche (which would later be called alternative or indie). While not necessarily a themed show, I play several songs in this episode that belong in the canon of eighties college rock.

The last song I play this week is from Chris M. Short’s compilation, On the 45: A Compilation of Obscure-to-Semi-Obscure Power Pop/Punk/New Wave. It’s a mind-blowing collection of songs he compiled from his personal collection of obscure 45s. It’s free, so download it now.

At any rate, enjoy the show.

Here’s a list of things, in no particular order, in my listening rotation this month.  (You’ll notice the fair amount of 2010 releases, as I’ve been considering my top ten list of albums from last year.)

It’s been one of those long, short weeks.  One of those weeks where I don’t really want  to complain because there have been times in my life when I’d kill for a four-day (heck, even a five-day) work week.

I can’t complain; it’s been a week full of things Katy and I love.  We’ve spent time with a lot of good friends, eaten mostly vegetarian food and listening to the new Starflyer 59 LP that finally arrived.  Anyway, there’s not much in the way of an introduction to this week’s show. I can say that my love of jangly pop/rock rears its head again, and I refuse to apologize.