Episode 106: The middle of July in a stocking cap. 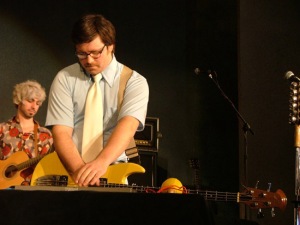 Dan Billen, performing with The Billions

I don’t know what the weather’s like in your neck of the woods, but it’s been insanely hot in Raytown this summer. About the only thing worth doing is watching my son play around in the living room and listening to records. Fortunately for us, a ton of great music has been released in the past few months.

I’m occasionally accosted by dudes who want me to play their music on my show. (As if they’ll see a substantial uptick in albums sold, right??) Usually their music is, at best, mediocre. But when Michael Edwards told me to check out his band, I was blown away. Not because it was the best thing I’ve ever heard or that it was something entirely new. No, the band impressed me with how comfortable it feels with itself and the audience. In this episode, I play a song from Genetic Engines’ new EP, Feed My Mind. Please buy it. It’s only four bucks.

I’m also petitioning discerning music lovers to buy Dan Billen’s new EP, Not Alone. Billen is a long-time friend who played bass in The Billions. Since the band broke up, he has quietly sat by as his brother amassed quite a catalog of indie pop. (Truth be known, he and his wife were trying to get their family started, a focus of many of his songs.) Like his best work in The Billions, Not Alone, boasts diverse styles and honest lyrics. Name your price and buy it.

I’m excited to record another episode. It seems like it’s been forever since my last one. I hope you enjoy. (For some reason, WordPress won’t allow me to stream episodes like I used to, so just use the download link at the bottom.)

Attending the opening of Danny Gibson’s new art show, Quietly Contributing, last week was quite the tear-jerker.  Gibson created posters for so many of my friends’ shows.  (And many of those folks were in attendance.)  Eventually, I also employed him for some work on posters and album artwork.

To accompany and promote the show, 35 artists have donated songs to a free digital compilation album.  If you don’t already have it, get it now.  I play one of the album’s songs, from my friend Dan Billen, this week.  It’s a cute, classy tune, begging for inclusion on the soundtrack to the next Jared Hess flick.

Oh yeah, and then there’s Eddie Hazel, one of my favorite guitarists.  This is the dude responsible for Funkadelic’s 10-minute masterpiece, “Maggot Brain,” a song so overpowering that I want it played at my funeral.  I’ve been rocking his lone solo album, Games, Dames and Guitar Thangs, a lot recently.  I don’t know why it’s taken me 89 episodes to play on of his songs, but I finally did.   And you’re welcome.  Enjoy.