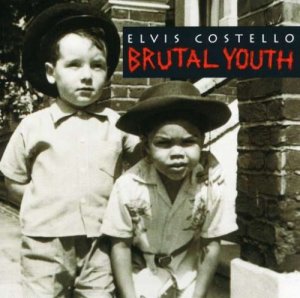 My sophomore year of college was a disaster. My parents split, my grades nosedived, I changed majors twice and my great-grandmother (whom we cared for) was hospitalized a few times. Early that school year, my friend Byron gave me a tape of Elvis Costello’s supposedly difficult and mediocre album, Brutal Youth.

I found much for me to connect with in the music, but in retrospect, I can see that I got it a little backwards.  At the time, I was digging deep into the discographies of my Christian rock heroes, Terry Taylor and Randy Stonehill.  As a result, I initially thought Costello sounded like Taylor from an early-nineties Daniel Amos record.  Now, I realize that I got it the other way around; it’s Taylor who occasionally sounded like Costello.  I was also impressed at Costello’s old-timey, pre-rock songs on the album.  On songs like “Favourite Hour,” his wide vibrato reminded me of my grandfather’s own canyon-wide vibrato.  Basically, I hadn’t heard much like Costello’s music and attempted to fit what little I knew of his work into my small, but quickly-burgeoning, schema of musical awareness.

So anyway.  Lyrics are rarely the first thing to pull me into a song, but I felt a connection to Costello through his humor.  I still chuckle at the chorus of “London’s Brilliant Parade” when he sings, “Just look at me, I’m having the time of my life/ Or something quite like it.”  While the record may not have been an ideal introduction to his music, the lyrics are certainly indicative of Costello’s playfulness with dysfunction.  He doesn’t always portray himself as the good guy, and he treats experience with jest.  “I’m just about glad that I knew you once and it was more than a passing acquaintance,” he sings.  Then he adds, “I’m just about glad that it was a memory that doesn’t need constant maintenance.”  On (probably) my favorite song, “This is Hell,” Costello describes hell as the opposite of all good things.  In the final verse, he sings, “‘My Favorite Things’ are playing again and again/ But it’s by Julie Andrews and not by John Coltrane.”  I think his writing is probably an acquired taste for most, but it immediately connected with me.

Between my commutes to UMKC and the hospital to see my great-grandmother, I spent a lot of time in the car that year.  I remember one month in which it seemed like Brutal Youth was playing non-stop.  There are so many reasons for this that don’t make sense with digital music.  Sometimes only certain tapes would sound okay on my crappy car stereo, and sometimes I was so busy that I didn’t have time to grab another tape before I left the house.  But more often than not, Brutal Youth just felt right, and I know that I listened to the tape 100 times in one month alone.

When I started a band fifteen years ago, I chose to name it after one of the quirkier songs on the record, “My Science Fiction Twin.”  Not only does the name obviously identify me as an Elvis Costello fan, but it also reminds me of that formative time in my life.  I made big decisions, lost relatives and formed new relationships.  Some of whom remain good friends with me to this day.

When I think of Dayton, I think of my in-laws, Roger Troutman and Guided By Voices.  I also think of Andy Ingram, promoter of first-class rock shows and member of about thirty bands.  He also runs Poptek Records, whose roster doesn’t exactly mirror, but draws upon the sounds and ethos that make the Guided By Voices catalog so great.  There’s everything from lo-fi bedroom pop to power pop garage bands on the label, and so many of the albums are available for free.  There’s no reason to go another day without Ruetschle, Kris N  and XL427 on your harddrive.

I play another artist this week, Pinkle, whose music is also available for free.  Please download his album, Invertible, if you’re a fan of pop songs, slide guitars and cheap drum machines.  You will certainly enjoy it if you dig Sufjan Stevens or Sam Billen (who has also posted a lot of free music).

Believe it or not, I don’t always aim to seek out the most obscure stuff.  It’s just that so much good music is under people’s radar, and much of it is cheap.  I’m more than willing to pay a lot for a good album, but don’t believe the RIAA who’d have you believe you need to buy what’s on the radio and pay full retail price for it.  It’s just that the good music may sometimes require a hunt, and that’s why I’m here.  Enjoy.

I’ve been re-evaluating Poor Old Lu’s The Waiting Room this week. It’s not one of those records I was into 15 years ago and was just curious as to how well it stands up today. Katy got it to review (I think?) just before we got married, but I was never into it.

Poor Old Lu was a Christian band in the nineties, and its members have continued to play important roles in the music industry. It reunited to record The Waiting Room (and play some tour dates, if I remember correctly) in 2003. It then broke up again.

I wasn’t really a fan of the band until its two mind-blowing releases: the Straight Six EP in 1995 and (its dark and final album) A Picture of the Eighth Wonder in 1996. This comeback record just didn’t do it for me in 2003, but I wonder if my expectations were to blame? I kinda like The Waiting Room now.

Alright, so my rotation this week, in no particular order. 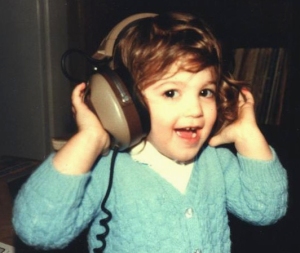 I am playing some records at Benetti’s Coffee Experience on Sunday, to kick off the store’s weekly Sunday Spins.  I will have a sign-up sheet for you to bring an album next week, so will hopefully I will be providing fewer records each week.

Most of the time at these events, I will play entire sides of albums.  To keep things mixed up, I have chosen only to play one side of each album.  I’ll occasionally break from this and play an entire album if warranted, like when I play A Love Supreme in a few weeks.  (I already anticipate people’s criticisms about only playing half of these albums, but trust me, you will still get plenty of deep album cuts and non-singles.)

Since album sides usually run about 20-25 minutes, you can plan on a different side about every half hour.  I’ll start at 6:00, so plan accordingly, if you want to hear a particular record.  (I’ve included links describing the albums, so do your homework.)

Oh yeah, and I’m going to post the next episode of Radio Free Raytown tomorrow morning, making your Friday even better!