Episode 99: Separate Torso from the Spine 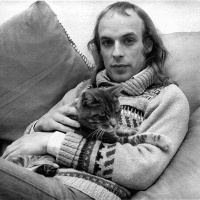 Apart from a couple friends, I just don’t hear many people discussing important bands like Sonic Youth, Velvet Underground or Joy Division. Even folks who pride themselves on listening to stuff outside the mainstream (Fleet Foxes, Sufjan Stevens, Sam Bean, etc.) don’t seem to have or desire a sense of musical history. I’m not asking that everyone be a musical savant like me, but it would be nice to see folks do their research and not dismiss some music simply because it sounds old.

This point in probably best illustrated in discussing the work of Brian Eno. The dude is responsible for so much huge, mega-popular music, but folks don’t seem to pay attention to him. It’s difficult to overstate his influence on bands like U2, Talking Heads, Roxy Music, David Bowie and Devo. (If you’re reading this blog, I assume you already have  an unhealthy amount these bands’ music on your harddrive.) Yet rarely do I ever hear anyone talk about Eno’s solo work.

I don’t think it takes particularly artsy person to appreciate (most of) his work. I just think it takes an inquisitive person who wants to discover the source for a favorite band’s inspiration. Alright, enough proselytizing.

I have a friend who claims to merely like the music that he enjoys and not necessarily fill his iPod with only good, critically-praised music. While this seems a cop-out when faced with criticism for guilty pleasures, he has certainly got me thinking this week about what influences my musical taste.

I think I can not-too-flippantly claim to liking music that I sincerely enjoy. While critics can obviously inform opinion, my taste has developed mostly through listening to lots of music. Simply put, discernment comes from listening to good records.

Hopefully that’s where this blog comes in. I hope to not only share my enthusiasm for music (It really is okay to prefer records to talk radio after college!) but also other bands and styles to investigate. You can decide what you like, but make it an informed decision. Enjoy.