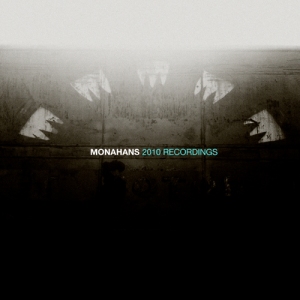 Katy and I saw Doug Burr play at Crosstown Station three months ago.  (It was a great set, cut much too short by Burr’s illness that night.)  His fellow Texans, Monahans, opened with a set, then served as his backing band.  I hadn’t heard of Monahans before, so I did some research that week before the show, finding a few songs online.

What I found, however, in no way prepared me for the band’s amazing set.  Although the singer, Greg Vanderpool, had a cold, his grumbly, low voice was beautiful.  His effects-laden, resonator guitar playing also surprised and refreshed.

While the band could probably be lumped in with other soaring indie rock bands, Monahans had something else going on.  The rhythm section drove the sound, but the drummer didn’t seem content playing the same dumbed-down Larry Mullen phrases.  There was also something murky, Springsteen-like and oh-so American with the songs’ presentation that made sense when I discovered the band was from Austin.

At any rate, I’ve been sick this week, so commentary in this show may be a little scant.  But the music is awesome.  Enjoy.

When I think of Dayton, I think of my in-laws, Roger Troutman and Guided By Voices.  I also think of Andy Ingram, promoter of first-class rock shows and member of about thirty bands.  He also runs Poptek Records, whose roster doesn’t exactly mirror, but draws upon the sounds and ethos that make the Guided By Voices catalog so great.  There’s everything from lo-fi bedroom pop to power pop garage bands on the label, and so many of the albums are available for free.  There’s no reason to go another day without Ruetschle, Kris N  and XL427 on your harddrive.

I play another artist this week, Pinkle, whose music is also available for free.  Please download his album, Invertible, if you’re a fan of pop songs, slide guitars and cheap drum machines.  You will certainly enjoy it if you dig Sufjan Stevens or Sam Billen (who has also posted a lot of free music).

Believe it or not, I don’t always aim to seek out the most obscure stuff.  It’s just that so much good music is under people’s radar, and much of it is cheap.  I’m more than willing to pay a lot for a good album, but don’t believe the RIAA who’d have you believe you need to buy what’s on the radio and pay full retail price for it.  It’s just that the good music may sometimes require a hunt, and that’s why I’m here.  Enjoy.

Episode 27: Across the Road From Hope

I was reading an article about some UK underground industrial/noise/avant garde band in a recent edition of Wire and became aware of just how ridiculous it was. (After my revelation, I continued reading, mind you.) You see, I spend a lot of time with my shows talking about off-the-wall musicians, but trust me, I do like some very popular artists. Unfortunately, many times, I am still rather picky with what I like by those big artists. It’s all about the songs, and not necessarily the performers, right?

*In listening back through this show, I discovered it sounds like I say that Springsteen’s  “Girls in Their Summer Clothes” is the best song Brian Wilson ever wrote. I’m not sure whether it’s the attack on my vocal’s compression or the bitrate of the MP3 that made it sound as such, but I should clarify that what I say is actually that it is the best song Brian Wilson never wrote.